Posted on August 25, 2014 by Pickpocket Publishing 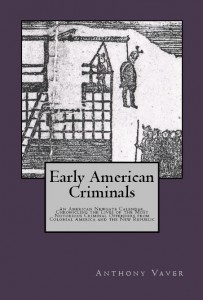 Pickpocket Publishing announces the forthcoming publication of Early American Criminals: An American Newgate Calendar, Chronicling the Lives of the Most Notorious Criminal Offenders from Colonial America and the New Republic by Anthony Vaver. The book is due out in the early fall, 2014.